The Price and Cost of Free Speech 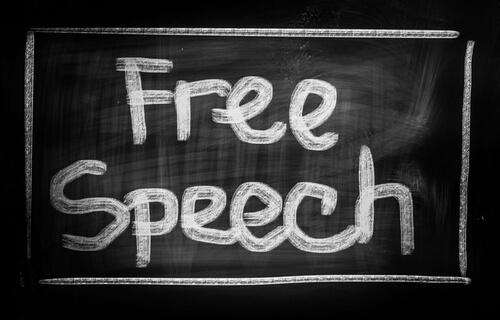 Once upon a time, colleges and universities  were  the place to explore and express new ideas, and to have vigorous debate and discourse, often about highly polarizing issues that included abortion, war, civil rights, and religion.  There was intensity and passion, but there was also respect that allowed for both sides to express themselves as well as to listen.

Somewhere along the way, a new tactic emerged that has not only brought the unintended consequence of contributing to the erosion of free speech, but seemingly had an equally debilitating effect upon our ability to dialogue.  People are no longer good people with a difference of opinion; they are instead quickly applied monikers that include ‘misogynists’, ‘victim-blamers’, ‘murderers’, ‘racists’, ‘sexists, as well as being characterized as evil, vile, and the like.  And all because they have a very different point of view.

It would seem that a rapidly-growing body of evidence supports the notion that labeling and shaming have become the biggest threat to the first amendment in more than a hundred years.

There have been many debates about whether or not we are creating a society of people ill-equipped to deal with some of the challenges that life can throw at us.  And  given the complexity of the world and the volume, variety and rate of these challenges, it is an understandable theory but the concern for our dwindling capacity to first understand and then be understood as Stephen Covey once so thoughtfully encouraged us, has more lasting effects.  This is not about trying to navigate the vitriol to somehow choose a side of a debate, but is more about the effects on free speech that targeted labeling and shaming has.

A rational person who does not want to be called names, nor be labeled or put in a box, is less likely to engage in civil discourse.  If less people engage, fewer viewpoints and ideas are shared—perhaps the voice that provides the clarity upon an issue we can all benefit from –and the intent and the very value of free speech is defeated.  Free speech is supposed to ensure that the greater good is always the goal.  Unfortunately, many today do not view the world from the view of the greatest good but through the lens of, “what is good for me?”.

Perhaps most troubling, is the very definition of free speech has literally morphed into something entirely different.  In its inception, ours was a society founded upon the ability to be free to express our ideas and our ideals without the reprisal of government.  Have we really gone so far as to now fear the reprisal of the community?

So let us ask ourselves a more productive question:  How can we reverse this trend?

I propose that we commit ourselves to a path in society—within our communities—in which we do not allow  apathy from ourselves and discourage it from others.  I also suggest that we do not allow ourselves to be intimidated by name calling or attempts to shamed; for if you believe in something, and have facts along with well-reasoned arguments to illustrate your position, we all must accept our responsibility to do so.  Finally, do not allow the tactics of today to attempt to take your voice, or steal the narrative on a given subject, but rather use that opportunity to reaffirm standards for dialog that include listening by all participants and opportunity respond thoughtfully, completely and directly—and that all engaged will value the passion of their counterparts.

And more specifically, if you’re in a university environment, it is imperative that we lead together in bringing our universities back to the position in which they are venues open to ideas, providing the discourse that produces understanding as well as mental toughness, and demonstrating the essential value of candid and objective research that pursues the discourse these institutions were envisioned and created to be.