The Importance of Reading Body Language During An Interview – Yours, Not Theirs 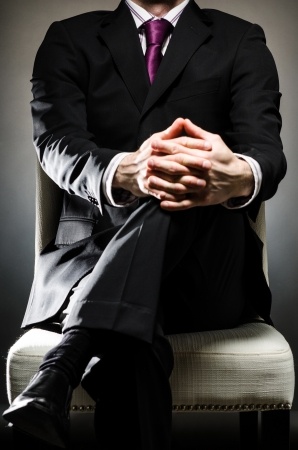 Many are quick to point out that during an interview, it is important to be able to read the body language of the panel and if necessary, make any changes to your presentation strategy.  When applied properly, this is indeed a useful and valuable skill to possess.  As an example, during your interview you notice a panel member is looking up at the clock on the wall each time you respond to one of their questions.  You conclude that you are being too wordy with your responses and should therefore try and be more concise.  Based on this observation, you have a chance to make appropriate adjustments before you completely blow your interview.

Assuming that your reading of the panelists gesture is correct, your adjustment may save you from failing. I don’t want to minimize the importance of such observations during an interview.  It is a valuable skill and I often share with my clients the importance of observing the panels facial expressions and their engagement during the interview.  My suggestion often causes them to ask where they should turn to learn more about how to properly read and interpret the body language of others so that they can make such adjustments during their interview?  I typically refer them to several excellent books written by experts in this field of study.  However, I always conclude by saying to them that “ it is far, far better to focus your attention on your body language rather than on the panels”.

Why? Our body language reflects who we are and as a result, it plays a major influence on how others view us.  Studies have shown that within five to ten seconds after walking into an interview room, the panel will begin formulating opinions about you.  Depending upon how they interpret such things as your posture, facial expression and body movement, the panel will begin feeling confident, ambivalent, concerned or negative about you.  Because many people have gotten into the habit of slouching, maintaining a stoic facial expression or sitting with a closed body position, they are unaware of how their body language is being interpreted by others.

We all have at least one bad habit that we resort to when under the slightest bit of pressure.  Some are quite obvious, others are much more subtle. But they are all interpreted either positively or negatively by those who view them. This is why it is so critical to properly prepare in advance of your scheduled interview and consciously begin to eliminate any negative habits that you may have acquired over time.   Such habits can range from; poor eye contact, ringing of hands, fiddling with pen or paper, rubbing our ear, neck or arm, brushing the tip of our nose, continually adjusting eye glasses, poor posture, slumping shoulders, slouching while seated, a stressful or unpleasant facial expression, or crossed arms or legs just to name a few.

We all recognize that such habits are undesirable and distracting during an important interview. Yet, if asked if we ourselves possess any of these habits, most of us would quickly say “no way” – without ever realizing that we do.

How then does one begin to eliminate such bad habits so that we avoid transmitting negative body language signals? There are three simple steps that most people would rather avoid engaging in.  Step one:  ask those closest to you to candidly share with you some of the negative habits you may possess?  Step two: videotape several mock interviews. Carefully and objectively critique your performance after each session. Look for those negative behaviors previously pointed out by your confidants, as well as any others you notice.  Step three:  Practice your upcoming interview with the goal of eliminating the negative behaviors you have identified.

By identifying negative habits and then, eliminating them through practice prior to any anticipated interview, you will greatly improve on your chances for success.