The Importance of a Handshake 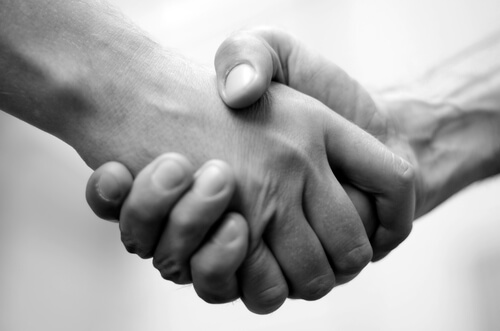 What’s in a handshake? Quite a lot, apparently. Most of us have probably been told that you want a firm or strong handshake, but is that always true? Are there different kinds of handshakes that you can use to convey different things? What can a handshake make other people think about you?

Dry, firm handshake. This kind of handshake conveys self-confidence and assurance, and is great when interviewing for a job. Just make sure not to grip too hard or it will feel like you’re forcing it.

Clammy handshake. Are you nervous? Because it sure feels that way to the other person if your hands are sweating. Most people won’t completely write you off for a clammy handshake, but it’s certainly not a great first impression.

Hand-eye shake. Want someone to feel like they can trust you? When you go in to shake their hand, be sure to look them in the eyes. Great for meeting your girlfriend’s parents or trying to convince a new client that you will fight for them.

Vice-grip shake. This one should only be used in very specific circumstances, since the underlying message is that you are going to crush the person on the receiving end, especially if you accompany it with a piercing look. Competing lawyers will often shake hands this way.

Finger shake. Ever had this happen to you? Someone reaches out for a handshake, but somehow only gets your fingers. It’s awkward, embarrassing, and uncomfortable, and most likely wasn’t their intention, but they’re not sure how to recover. If it’s you who makes this mistake, unfortunately there’s no easy out. But you can’t let the moment just pass by, so call attention to it. “Let’s try that again,” or “Wow, that was awful. Re-do?” Most people will appreciate your self-deprecation and admission that the handshake was a failure. At least you’re not just going to ignore a problem.

The limp noodle. When someone just places their hand in yours and lets you shake it. Most people are turned off by this, but you can use it to your advantage by making someone believe you’re not a threat to them. No one fears the limp noodle.

Two-handed shake. Characterized by either covering the person’s hand with both of yours or using your second hand to grip their forearm or elbow. Generally this is done while making eye contact, with the intent of making the other person feel safe and connected to you.

As you can see, there are a number of different ways you can shake hands with someone depending on the type of impression you want to give. Before heading into a new situation, think about what you want your relationship with this person to be like and go with the appropriate handshake – and if you’re just not sure, stick to the classic grip: not too firm, not too soft, and no lingering.