Your Guide to Cubicle Etiquette 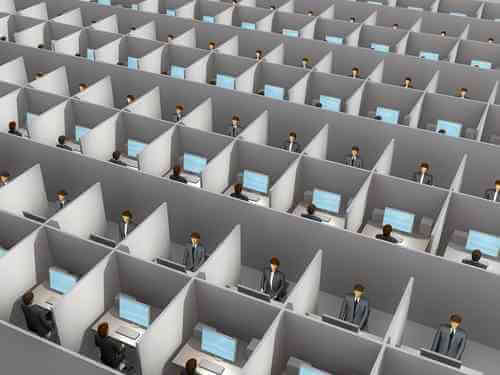 Working in the cubicle farm of an office means that you are going to have to spend 40 hours a week (or more!) in close proximity with the same group of people, all of whom come from different backgrounds and who have different belief systems. By their very nature, cubicles just aren’t very private. If you’re lucky, you might get one with walls to shield you a bit from the rest of the world, but even then, what you put up and how you act within your cubicle isn’t going to be a private affair.

With that in mind, there are a number of things that you shouldn’t do – or should at least keep to a minimum – to maintain peace and show respect for your fellow workers.

Take personal calls outside. Calling a friend or family member from your cubicle is so tempting. You’ve got the phone right there in front of you, and you’re already sitting in your comfy desk chair. Why would you get up? Well, maybe the guy behind you is trying to concentrate to finish a big report by that afternoon. Or the woman in the next cubicle just doesn’t want to hear about your baby brother’s girl problems. While making a few personal calls in your cubicle isn’t a big deal, it’s definitely not something you want to make a habit of.

Turn down the music. There’s a hilarious scene in Office Space where the main character tries to get the person in the cubicle next to his to turn down his radio, only to be rebuffed because someone else is allowed to listen to music on headphones, and he doesn’t think it’s fair that he has to turn his music down. Unfortunately, this kind of atmosphere misses the point: we all have to work together and show respect for each other. If people are fine with the music, great. If not, get some headphones.

Bring the scissors back. Everyone borrows from others at the workplace, and there’s nothing wrong with that; this kind of teamwork should even be encouraged. However, that doesn’t mean that you’re free to just take something from someone and keep it – especially if you “borrow” it without telling them. If you do take something without asking, just make sure to return it, apologize, and thank them. Consider leaving a note if they’re not at their desk.

Keep it clean. You might curse like a sailor at home, or think that obscene posters are hilarious, but that doesn’t mean everyone in your office will. Don’t decorate your space with anything that might be construed as offensive, and try to avoid profanity.

Leave politics (and religion) at the door. This doesn’t mean that you can’t express your beliefs or show your support by putting up personal items. It does, however, mean that you should think before putting someone else down because of their beliefs or trying to push your ideology to your coworkers.

Remember, respect, peace, and harmony – how else are you going to get through to the weekend?

Description THIS POSTING MAY CLOSE AT ANY TIME ONCE A SUFFICIENT NUMBER OF APPLICATIONS HAVE BEEN...

Description The Senior Program Analyst is a journey level classification and under general supervision from the...