This Position is Grant Funded-Program continuation is dependent upon successful funding Under direct supervision, schedules, coordinates, and provides daily pick-ups and shuttle service for older adult residents of the City; and performs related work as required.

Knowledge of:
Ability to:Education and Experience:
Any combination of training and experience that would provide the required knowledge, skills, and abilities is qualifying. A typical way to obtain the required qualifications would be:

Equivalent to completion of the twelfth (12th) grade and two (2) years of experience driving large vans. Must successfully complete a physical examination, drug screen, and background investigation (including fingerprinting).

Must possess mobility to operate a motor vehicle and drive on surface streets; strength, stamina, and mobility to perform light to medium physical work; vision to read printed materials and a computer screen; and hearing and speech to communicate in person and over the telephone or radio. Finger dexterity is needed to access, enter, and retrieve data using a computer keyboard or calculator and to operate a motor vehicle. Positions in this classification bend, stoop, kneel, reach, and climb to perform work. Employees must possess the ability to lift, carry, push, and pull materials and objects weighing up to 50 pounds, or heavier weights with the use of proper equipment.

Employees work in the field and are exposed to loud noise levels, cold and hot temperatures, inclement weather conditions, and road hazards. Employees may interact with upset passengers or general public.
Closing Date/Time: 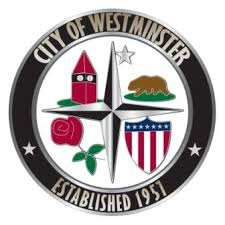 About City of Westminster

The City of Westminster is located in northwest Orange County, California. It occupies 10.2 square miles. Westminster is culturally diverse with its rich blend of residents, businesses, and tourists from many ethnic cultures and backgrounds. Westminster is 5 miles from the Pacific Ocean and 25 miles southeast of Los Angeles. Incorporated in 1957, the City is bordered by Huntington Beach, Garden Grove, Seal Beach, and Fountain Valley. It is conveniently located by the 22 (Garden Grove) Freeway on its northern boundary and the 405 (San Diego) Freeway on its southern boundary. It is 15 minutes from Disneyland and Knott’s Berry Farm and just minutes from Southern California’s beautiful beaches. The John Wayne Airport is within 10 miles and the Los Angeles International Airport is 45 minutes away. The City is home to the Westminster Mall and the Westminster Center which is a 40-acre site with a variety of retail, food services, and a large theater complex. A Walmart and Costco Business Center are also within the City and are easily accessible, situated along Beach Blvd. by the 22 Freeway.

In 2015 the State reported Westminster to have an estimated population of 91,106. The richly diverse community that makes up the City of Westminster is comprised of 47.3% Asian and Pacific Islander, 25.6% White, 23.6% Hispanic, 0.8% Black, and 2.7% All Other Races. The City boasts the nation’s largest concentration of Vietnamese Americans at 36,058 residents.

Orange County’s Little Saigon offers Vietnamese-Americans a slice of the original Saigon – with Vietnamese architecture and festivals, Vietnamese doctors and herbal medicines, and Vietnamese temples and television stations. Tucked inside Little Saigon’s shopping centers and strip malls are small, family-run bakeries, tea houses, and delis. In all, there are more than 390 restaurants, about two dozen TV and radio stations, and three daily Vietnamese-language papers. Little Saigon’s centerpiece is the 150,000-square-foot Asian Garden Mall, a hub of Vietnamese-American businesses and cultural activity.

Westminster has a Council-Manager form of government with the City Council appointing a City Manager. Four persons are elected by popular vote to serve four-year terms on the City Council. Since 1986, the voters directly elect the Mayor for a two-year term.