The Three States of Momentum 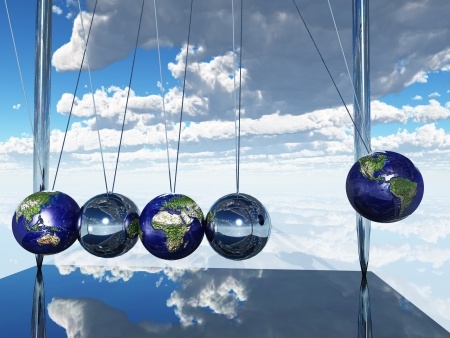 There is an intriguing co-existence of frequencies in all organizations that leaders are quite familiar with:  That individuals typically are driven by motivation, while organizations (or substantial groups within them) predominantly run on morale.  Leaders–and managers–often have powerful relationships to these norms.

While leaders will respond by taking action to maintain and strengthen their focus upon the person by furthering the development of his or her role as part of the purpose of the organization, managers will more often react by working more to attempt to fix the sentiment or attitude of the group.

Each of these scenarios shares a powerful commodity for which the leaders and managers become stewards.  This dynamic ingredient can be and often is more valuable yet perplexingly elusive to each of them when they attempt to control it.  And as it ebbs and flows, it remains tangible:  As an asset of modest or great advantage during progress, or it may signify a subtle loss in organizational capital, or worse, an extreme deficit during a decline in response to a key event or trend.

That commodity is momentum.

Momentum is much like water in that it has various states.  Both are fluid, and solid, and at times of transformation, a vapor.  Like water, momentum can run hot or cold, even to the extremes of being inviting or unrelenting.  Momentum can also be invigorating or dangerous.  In fact, when momentum is literally transforming from one state to another, our experience also reminds us this is a process we can all recognize and know well of its own influence upon a group environment.

Where momentum is a comforting and expansive warm pool, abundant and rightly enjoyed by those who share it—you’ll see people literally jumping in.  But if we must be cautious, for is we as leaders fail to actively monitor the climate and the condition of that energy, this form of momentum will literally evaporate and we’ll lose whatever influence [control] we had on it and more importantly the benefits from it.  If our efforts to lead through our people are not timely and accurate, those vapors can then reassemble in the form of a brutally cold wall that may take much more time, energy and resources to restore it to a state in which we can utilize it to our advantage.

Momentum swings quickly in many settings.  For highly-purposed and learning organizations, it is a currency that has widely-understood value and is nurtured by all shareholders.  In fact, the most skilled leaders and their teams also recognize key moments in which a transforming momentum can be accelerated or redirected into a turbine-like intensity in which the group’s confidence and an appropriate sense of urgency brings a strong period of achievement.  That period can last weeks, months, and in some cases even years.

It is equally true that when difficult events or times challenge an organization, it is in those very reserves in which momentum has provided a group significantly more individual and collective resolve, confidence and courage that will allow them to perform through that leaner time and achieve a new form of success.  Leaders maintain those reserves; they go to them in strategic moments to revitalize a team, reaffirm a particular objective, or restate desired outcomes while maintaining the group’s ability and responsibility to accomplish those goals.

This amazing element in any organizational environment is also one that requires attention to avoid being overwhelmed by too much of any of its forms.  While swift and specific actions are appropriate to resolve lower morale, it is equally important to ensure that momentum in significantly large forms that are in transition are also facilitated to avoid a culture of chaos to develop.  And as for organizations whose successes are plentiful and sustained, leaders know well that maintaining a clear focus upon the purpose of the group and the mission of the organization is the best way to prevent an aura of over-confidence—also known as arrogance—from distracting the team.

Leaders contribute to these environments by choosing to remain focused upon the core ingredient of momentum—the individual.  While groups and organizations are influenced greatly by momentum, it is the organization that maintains a high value upon learning within its mission who remains best prepared and resourced for sustained success.