Being Fashionably Late in the Workplace 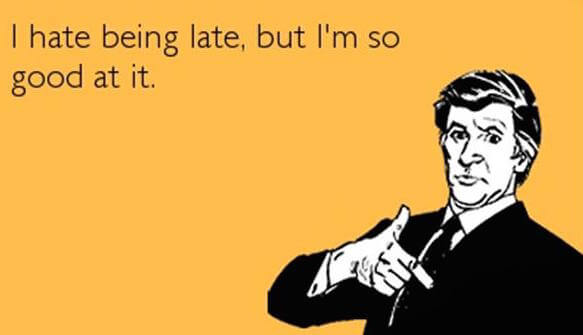 Contrary to the title of this blog, I will not be providing reasons why showing up late to a meeting is acceptable in any way. Rather, I want to make it clear that there is no such thing as being fashionably late when it comes to professional occasions. Even if you completely enjoy every aspect of your job, work is not a party, so don’t treat it like one and make a grand entrance by being tardy.

Has being punctual become a thing of the past? Or is being on time, if not early, the acceptable standard in certain industries, but not others? When working in the military community, I rarely encountered meetings that were started late or individuals that would enter 20 minutes later than their expected arrival. It just didn’t happen and that was the norm and expectation. I have also experienced the other end of the spectrum, where not just one, but two or three people would show up late to almost every single scheduled occasion.

For a person like me who gets anxiety at the thought of being late, this new shift towards tardiness being acceptable is becoming increasingly frustrating. When I have a place to be, I always include a time buffer into my preparation and travel plans. While I try to plan in advance, being a working parent and maneuvering around northern Virginia can throw quite the curveball (or two) on some days. It’s understandable for everyone to be unexpectedly tardy every once in a while. After all, we are only human and we lead busy lives adhering to our jam packed calendars.

Some days it seems easier to go with the age old mantra, “if you can’t beat them, join them”. By succumbing to the new social normalcy and joining others in being late, you won’t get frustrated by other’s poor time management. But is that really the best course of action? Absolutely not! Dealing with the frustration and being a punctual professional has many more positive aspects.

By being timely, you show others that not only is your time management on point, but that you are respectful of their time. Time management is crucial to proving your worth and advancing in your career. While you may not feel noticed for always being on time, rest assured that the constantly late folks are being noticed, but not in a desirable way.

By arriving on time, you build trust with your colleagues. You become known as dependable and reliable. Don’t let forgiveness and acceptance of routine delays deter you from upholding your punctuality standards. Being on time presents a professional image that you shouldn’t compromise. The only way to make a fashionable entrance into a building, teleconference, or meeting is to do so at the set forth time.

The County of Colusa Department of Agriculture is recruiting for an Agricultural Biologist & Standards Officer...

Job DescriptionUnder general supervision, purchases and provides an inventory of all parts and supplies for the...