New Opportunities and Challenges with the Gig Economy 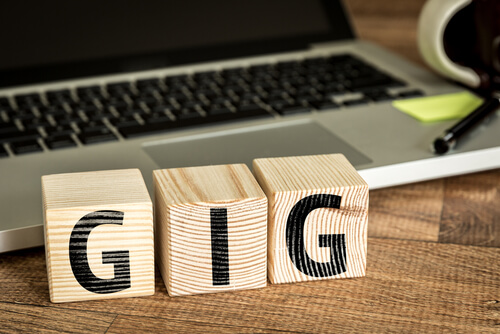 The job landscape is quickly changing. Jobs that were once readily available and steady sources of income to millions of people are changing or disappearing. It’s a topic that has come up a lot in this year’s political campaigns.

The gig economy is comprised of a number of different companies serving their customers by performing tasks, or “gigs”. Most people are familiar with the gig economy through apps like Uber or Lyft but there are many more companies offering their services with gigs. These gigs vary from delivering food to getting paid to explore your city.

One of the promises of the gig economy is the ability for people to work on their own schedule, be their own boss, and have access to a variety of sources of income. Yet this also proposes challenges like the lack of employee benefits and a steady source of income.

This has created a challenge for local governments. Since many of these services are so new, there aren’t any laws currently in place to help governments deal with the issues. Therefore, local governments are having to figure it out on the fly.

So far it’s been mixed results. On the one hand, local governments want to be on the forefront of new economic changes and provide the latest and best services to their citizens. Yet on the other, they also want to protect their citizens and make sure they are treated fairly in the workplace and have what they need to thrive. It’s a tricky balance but one required to move forward.

Most of the response has been to demand a reclassification of gig workers from independent contractors to part-time or full-time employees. This works in some cases and can be mutually beneficial to both parties but it also takes away one of the very promises of the gig economy, the freedom to be your own boss and work your own hours.

That’s why I created an app called The Gig Saloon. The app is one place where anyone who works a gig or has an interest in working a gig can go and explore new opportunities, read relevant news, and share their experiences. The app puts the power into the hands of the worker, while still keeping the promise of freedom and flexibility.

One way workers in the gig economy can gain power is by having many choices. If you depend only on one company for your income then losing your job can be devastating. However, if you can hop from one to another without missing a beat, then you have the ability to go where you’re treated best. If everyone can do this it forces companies to increase their offerings, benefitting everyone.

The Gig Saloon provides this benefit by allowing users to find relevant opportunities based on their location, the requirements they meet, and types of gigs they are interested in working. Many people are surprised by the number of opportunities that are currently available to them. And whenever you feel like you’ve found something you’re interested in, you can apply directly from the app with your information pre-filled.

Another way to increase the strength of workers in the gig economy is to give workers the ability to share their experiences with each other. The Gig Saloon provides a few ways to do this. The first is through gig reviews. Workers can review the gigs they have or have worked by rating them out of 5 stars and providing their average hourly wage.

This creates a balance that hasn’t existed between the worker and the company. Gig workers are often rated for their services but the companies aren’t. Now workers can let others know what they can expect and what companies treat workers the best.

This is also a powerful feature because on their own websites, companies provide estimated earnings but these often do not accurately reflect actual workers earnings. Instead, they are usually best-case scenarios and can mask what workers will actually earn once they start.

The other way the app allows workers to share their experiences is through a forum. Workers can add posts and comments to discuss what it is actually like working gigs. Ever want to know what it’s like to be an Uber driver? Now you can ask and get responses directly from people who have done it. This provides potential and current workers with more information to help them with their gigs and find new opportunities.

The gig economy might be something you’ve just heard about for the first time but it shows no signs of slowing down or going away anytime soon. It poses some unique challenges that we’ve yet to face but also some new opportunities we’ve never seen before. Our society will need to adapt to this new job landscape and I hope The Gig Saloon will help us do that.

Description:Job Summary Reporting to and receiving limited supervision from the Director of the Accessible Education Center,...

Position Description Provides leadership and direction in all aspects of administering multiple university branch campuses or...