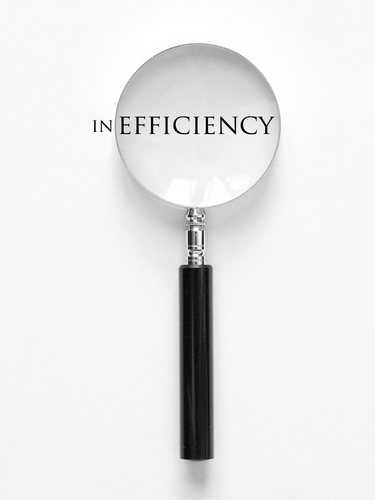 In a May 2012 Wall Street Journal article, Leslie Kwoh warned that the term “innovation” was at risk of becoming cliché. To support her observation, she provided a number of examples, the most astonishing of which was a 64% increase in the number of times the word innovation (or some form thereof) was used in Securities and Exchange Commission (SEC) filings. In short, many companies claiming to be innovative were, in fact, everything but.

A similar occurrence has taken place in the public sector, though our buzzword has become “efficiency.” Tasked with delivering critical services in volatile budget situations, state and local governments have sought ways to cut costs and ensure the maximum return on the investment of public funds. A recent Governing article by Katherine Barrett and Richard Greene explored the formation of public sector “efficiency commissions” designed to stretch taxpayer dollars. Their findings, however, suggest that few organizations actually assess the impact of these commissions or their recommendations on the bottom line. Consequently, there is no way to confirm the effectiveness of efficiency programs at achieving their stated goals. It is with this in mind that I’ve prepared the following recommendations for efficiency initiatives in the public sector.

Process improvement and cost reduction strategies have been in place for centuries. Yes, you read that correctly…centuries! The Venetian Arsenal worked toward (and achieved) standardization in the 1400’s. Ford Motor Company was a pioneer for just-in-time manufacturing in the early 1900’s. The point here is that proven frameworks exist that can be used in a variety of organizations. Even Toyota, the company largely credited with starting the modern lean movement, based their Toyota Production System on the work Ford had done decades before. Like the private sector, state and local governments have channels at their disposal to share best practices. Organizations such as the Alliance for Innovation and the International City/County Management Association provide resources that enable agencies to learn about and build upon the efficiency efforts of their peers.

All too often, the staff managing efficiency initiatives do so under artificial constraints. Examples include excluding public safety or enterprise-funded departments from review, failing to place the positions at a high enough level organizationally that they carry sufficient authority, and diluting their primary mission with other ancillary responsibilities.

It is critical to the success of efficiency programs that nothing be “off limits.” Culturally, this creates less animosity between different employee groups. Moreover, many of the departments who, due to political factors are traditionally exempt from evaluation, provide the most significant opportunities for improvement. Placement of the positions in the organizational structure and, likewise the responsibilities of these positions, are also important. The staff should be at a high enough level that they are viewed as colleagues with different levels of management (and have direct access to executives). Additionally, while they may be some of the “best and brightest” employees, they should remain focused on their primary goals (process improvement and cost reduction) rather than becoming a “catch all” for every challenge that may arise.

If “efficiency commissions” or programs are successful, an organization is faced with the challenge of tracking the money that has been saved. For some projects, this will be easy. Tangible reductions in operating costs are straightforward and easy for elected/appointed officials and citizens to visualize and understand. Conversely, process improvement outcomes must be quantified. It is vital that organizations agree upon and adhere to a defensible methodology for doing so.

In tracking the cumulative savings, an agency must be prepared to account for unpredictable budget cycles driven by changing demands. For example, a reduction in information technology (IT) expenditures in one fiscal year may be followed by an increase in the IT budget the following year (to account for different service levels). This may or may not be indicative that the savings is no longer materializing. Organizations employing efficiency teams must be diligent in their efforts to document the immediate and ongoing financial impact of recommendations to ensure they are adding value without drastically overstating their influence.