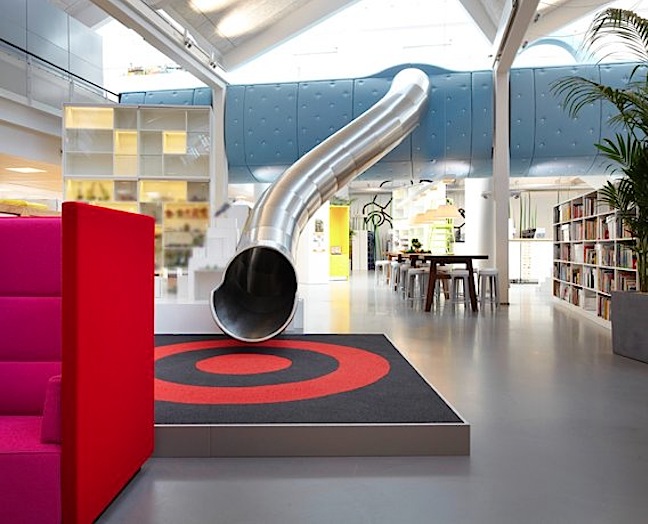 Baby boomers are finally leaving their desks behind and signing up for AARP.

Millennials are out there looking for jobs and cement isn’t on their list of desirables in a job search. They are attracted to government jobs, but not government culture.

Startups, tech companies, and other forward-thinking companies that are tuned in to what Millennials want have figured out that the office atmosphere, layout, environment, and culture make a huge difference when attracting top talent.

Sure, pay is important.

But the difference between getting paid to work in a solitary cubicle and a paycheck for working in a welcoming, open, collaborative atmosphere is unquantifiable. Unquantifiable, but the open atmosphere sure looks like more fun.

How can the government attract great talent and compete with cool, eclectic startups? Millennials interested in public service may start out working for local government, but statistics show that they don’t stick around. Those really talented professionals escape the cubicles as soon as they can run for it.

Who Works for the Government Now

A lot of government workers have chosen their jobs because they like to work alone. They want to just hunker down at their computers and get the “job of the day” done and go home. This loner culture may have worked in some respects, but in the long run it doesn’t spawn leaders.

The average age of government employees right now is 45.3. Federal employees are about 47.

This is a huge part of the worry. These folks are going to retire in a mass exodus.

Working alone results in less chances to move up, poor work environment communication skills, and, well, being lonely. These are the people who will likely move up in position due to seniority rather than performance. If they’ve been in their cubicles too long, it’s a safe bet that they won’t be terrifically effective at leading a team or managing a project.

Recent downsizing of middle managers has widened the gap between local leaders and upper management.I know what you’re thinking: “Now I know why government agencies work as ‘efficiently’ as they do…”

Some of the problems in the current government offices are based on the inability of the loner managers to lead with their limited communication skills, the tendency for the newly hired Millennials to communicate virtually instead of face-to-face, and those darned gray cubicles.

Add the need for local government to recruit some top talent on their decreased budget and the fact that unhappy employees are less productive, and you land in our current state. I’m still reeling from the statistic that $250-300 billion is lost due to impaired productivity. And we wonder why the US is in debt?

Let alone the fact that these young professionals are seeing a very fun and glamor side of office environments from companies in the private sector like the following below. 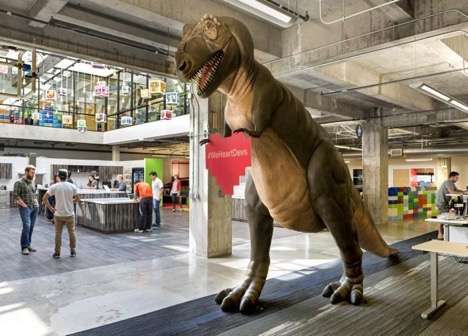 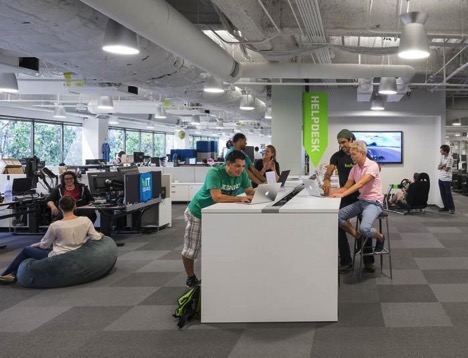 One survey actually showed that the percentage of federal employees acknowledging that they are looking for another job to be 50%.

Here’s what the standard office design is: 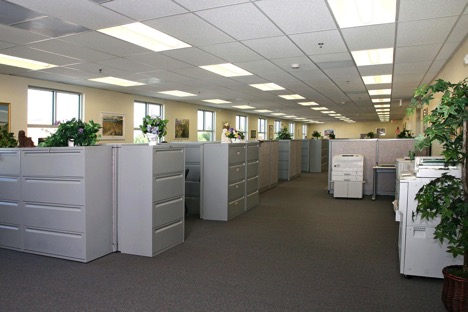 The surveyors were surprised.

Are you though after seeing what these companies are doing to their work environments? We would be part of that 50% too!

I wonder if there is a nurse walking through the cubicles handing out antidepressants. And if that’s being paid for by our taxes. We wrote an article called “How to Keep Employees in the Office without Chains or Adhesive on the Furniture” that talks about how to change that statistic around by making the work environment more enjoyable.

Who Are the Millennials?

Just to be clear, Baby Boomers are retiring, Millennials are looking for jobs. The linked article refers to a research analysis done by the Government Business Council.

Results indicated the federal government will need – wait for it – over 200K for vital government jobs very soon.

The pool of talent? Millennials.

Millennials are the most ethnically diverse generation. They have active, busy lives with work, home, and hobbies. They love technology because they grew up with an iPhone instead of a pacifier. They want their work to count for something and make meaningful change.

That is as important, if not more important, than starting salary. They have been raised working in groups in school and expect to continue that in the workplace. They set goals and want to meet them.

The Millennials’ desire to “make a difference”and “give back” draws them to public work…for a couple of years. But the drawbacks push them away to find a better fit elsewhere once they have untangled the red tape and can make their escape. They are attracted to working “for the people,” but not in the current government ambiance.

In fact college students planning to look for work in government jobs is dropping.

After considering all of the reasons Millennials don’t want to work for the government, yet the need for top talent in those jobs, especially with Boomers retiring, what can be done to change things? Notice that I didn’t say change “them” because they aren’t what needs to change. The environment and culture to drive them to want to be there needs to change.

Know what Universum, a global research company, found out when they surveyed college students?

The most important things an employer can offer to pull them in:

To recruit and retain Millennials, not only do we need leadership that is motivating and encouraging, we need an atmosphere that works. A culture of collaboration and an office layout to match is the perfect combination in having your Millennials feel as if they have an office that they can thrive in and want to brag to their friends with.

Now I know we been ragging on cubicles, and it’s not that we hate them. We actually do find them to be very beneficial. The problem is that they are used, more often than not, as a commodity without a specific rhyme or reason other than a way to place people to work in. What companies need to do is look at space planning their office to be an “Art”, and understand how to effectively place products to what would resonate best to the overall atmosphere of the environment.

For example: Instead of 6 foot tall cubicles, where anyone who is a NBA Player height can see your floating head. Try something a bit lower where you can see the office better and interact with one another seamlessly.

Be Open for open work areas.

Tables where employees can sit and work together on projects as well as desks or workstations for quiet thinking and completing tasks. Think about being able to turn around and talk to the person next to you instead of contacting them via formal office email protocols or instant messaging, depending on your generation.

A space like this is friendly to all generations and promotes a fluid movement and sharing of ideas throughout the office: 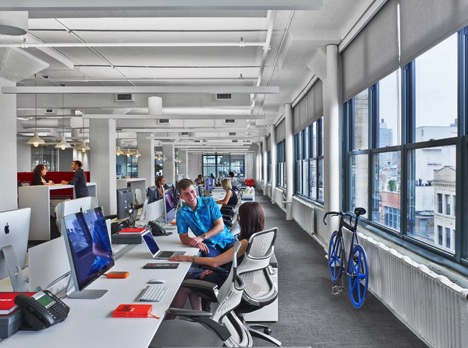 What if the break room looked more like a café? Or actually was a café? While the government may not be inclined to indulge in some of the rumored perks of Facebook or Google, they could probably swing a nice little break space.  Also envision a meeting room with glass walls, literally and figuratively representing the open office culture:: 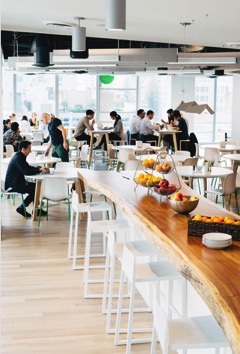 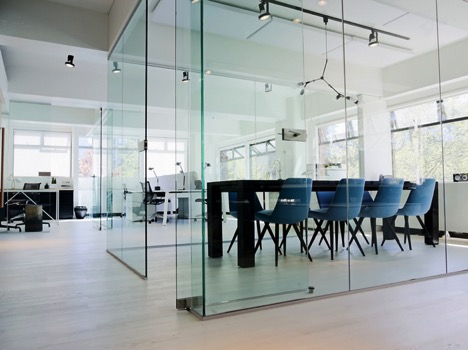 Now you have the idea.

A big, open space with clusters of collaboration areas, whiteboards, smart boards, tables, and comfortable chairs. By the way, these are NOT the gray chairs from the cubicles. Those have been recycled. These chairs are comfortable and contemporary. The colors vary, but can be interchanged and moved without making the office look muddled.

Of course, there would be areas for simple contemplation, with couches or upholstered chairs. These can be grouped or moved, hopefully towards a window with a nice view.

This is one vision. There are a lot of others. But the main idea is a comfortable, open space that offers employees the opportunity to create their own culture in the office. Collaboration, friendships, respect, communication, and squelching the desire to throw a stapler at the cubicle wall can all happen here.

Then comes the challenge. Calling all US government offices! We dare you to break out of the mindset of thinking of your furniture as a commodity and create a space that has value and makes your employees WANT to work there.

And maybe even stay.

All it takes it to think about how your office makes you feel and if you honestly love it. That is what those cool emerging companies think of!

Description:The Industrial and Manufacturing Engineering Department in the College of Engineering at California Polytechnic State University...